VitalsBridge consists of software and hardware that is used to train medical professionals. The VitalsBridge simulates vital signs and allows these signals to be shown on a real clinical patient monitor so that medical trainees have an opportunity to apply their theoretical knowledge hands-on. Depending on the hardware model, displayed data can include oxygen saturation, invasive and non-invasive blood pressure measurements, heart rate, temperature, respiration, and more. Dynasthetics collaborated with Diversido on various VitalsBridge software components, such creation of Android and iOS apps, as well as performance updates to Bluetooth communication.

How Does a VitalsBridge Work?

The VitalsBridge technology may be used with standardized patients or manikins. Standardized patients are specialists trained to reenact various plausible doctor-patient scenarios to help medical students learn and apply their skills. VitalsBridge software and hardware can be used with different kinds of manikins, including low-, middle-, and high-fidelity manikins. These three levels describe how lifelike a manikin is. Low-fidelity manikins are not realistic; they’re segmented, often comprising separate body parts like IV-arms and CPR manikins. Mid-fidelity manikins are full-body, but they are limited in hardware functionality. High-fidelity manikins incorporate sophisticated hardware that allows them to realistically respond to the actions of clinicians.
VitalsBridge connector software for desktops or VitalsBridge mobile app establishes a link between VitalsBridge hardware — processor board of a set, clinical patient monitor, and manikin or a standardized patient. Other solutions on the market offer clinicians to purchase a separate patient monitor to run simulations for trainees — VitalsBridge connects every component of the simulation chain to patient monitors clinicians already have.
To use the VitalsBridge app, download and open it. The program will start to search for suitable hardware so you can find VitalsBridge’s processor board. When the connection is established, you can begin setting the vital signs for a training session. Depending on the processing board you’ve got, you’ll see different training sets of vital signs to display. In the app’s configurations, you can calibrate the app and synchronize it with a processing board. Then, connect your manikin or a standardized patient to the hardware and begin the training. 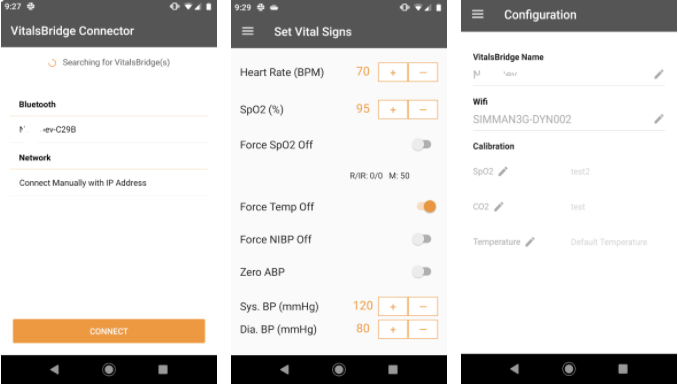 We joined the project when the customer needed an Android app. Later, another issue occurred when Microsoft stopped updating their IoT suite tailored to the needs of embedded systems, also known as Windows IoT Core. We assisted with migration of their embedded IoT software to run on a Linux OS, — there, availability of 5G solved significant connectivity challenges.
Another challenge our team had to deal with was establishing a Bluetooth connection compatible with Apple’s iOS. The early version of VitalsBridge used Bluetooth Classic (Rfcomm), which required a cumbersome pairing of the client device with the VitalsBridge. Diversido led the implementation of updates to have the VitalsBridge communicate using Bluetooth Low Energy (BLE), and the results led to improved communication performance and reliability. To do this, we used D-Bus as middleware that allowed two different message streams to co-exist within one machine.

Right now, VitalsBridge connector software can connect to the vital signs computer through Ethernet, Wi-Fi, serial data cable, or Bluetooth. In addition to the desktop Windows-based version, Android and iOS applications exist. The iOS client can connect to a processing board via BLE (Bluetooth Low Energy 4.0) technology and a Wi-Fi connection. Android and iOS applications have been developed using a .NET cross-platform Microsoft framework - Xamarin.Forms.

All patient monitors made within the last 20 years are compatible with VitalsBridge technology, including those manufactured by Philips, Spacelabs, Propaq, Zoll, Welch Allyn, etc.

You can find VitalsBridge in Google Play Market, the Apple Store (forthcoming), or on the company website. The app is free, and it doesn’t contain in-app purchases or ads. The purchasable component of the set is VitalsBridge's hardware that is required to use the app. The latest update makes the app compatible with the newest hardware, VitalsBridge FM.

What issues does it resolve?

The only way to memorize how to do anything efficiently is by doing. The mobile app for VitalsBridge helps to bridge the gap between theoretical knowledge and lack of practice medical students have in an environment that looks like clinical settings but is mistakes-tolerant and risk-free.

VitalsBridge app is useful for medical schools, students and their mentors, hospitals that often accept interns, organizations that run first aid training, and so on. The University of Utah, for instance, is already utilizing VitalsBridge technologies — watch their video detailing how to use it with standardized patients.


download for Android
Hire us Let's work together! Tell us your ideas, and have a free 30 minutes consultation!
Join us If you are a talented specialist, passionate about your work, eager to create great products with the creative team, write us!
Top